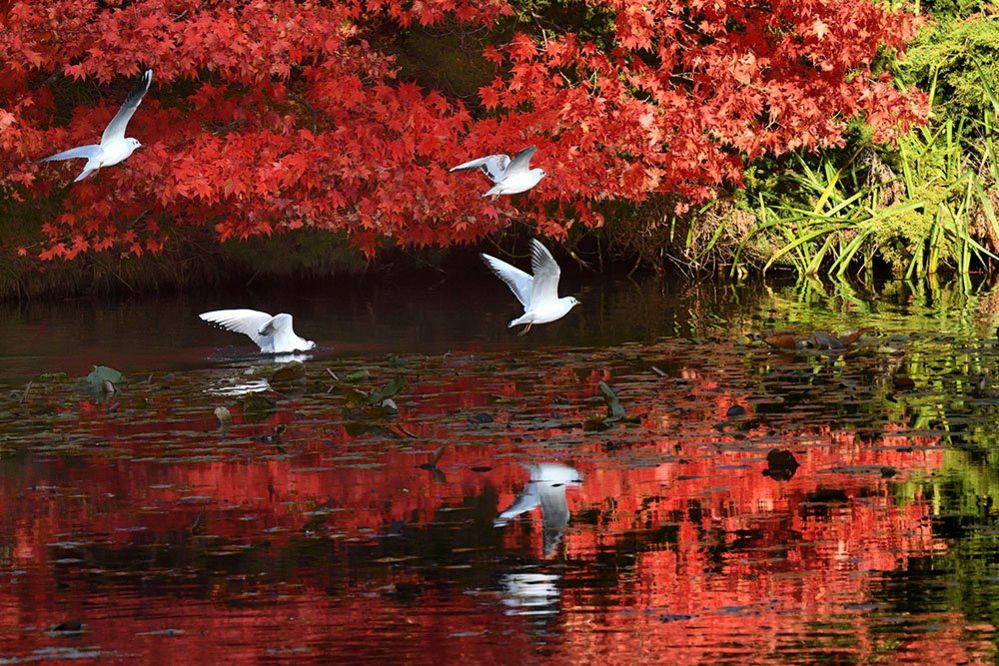 We asked our readers to send in their best pictures on the theme of "autumn walks". Here is a selection of the photographs we received from around the world.

Laura Murphy: "Taken on a wet walk whilst on holiday on the Isle of Arran, [North Ayrshire,] Scotland."

Alecia Ibinson: "The brightest leaf of them all."

Ruth Rasbridge: "Horsing around - not so much of a gallop but more of a gentle stroll - Gower, Swansea."

Valérie Risi: "On a lovely walk towards the village of Skendleby, in the Lincolnshire Wolds, we spotted those beautiful mushrooms."

Vahe Saboonchian: "So many people walk their dogs at the park every day - and over the years, many friendships have been forged there. I noticed this group of friends chatting, wonderfully framed by the tree branches. The bird flying across the shot was an added bonus."

George Lipscomb: "We have a lot of squirrels in our local park and this one took ages finding his lunch amongst the autumn leaves."

William Howes: "Most autumn walks consist of orange and red leaves but not all. This walk had more mushrooms than I could count and this photo was the most perfect one of all of them."

Charlotte Whitaker: "Collecting all the conkers we find on a walk."

Edwin Deverill: "A damp stroll through the New Forest in September with the kids - we found a variety of wonderful mushrooms to photograph."

Ellen Cox: "Well what else are autumn walks for? My daughters' favourite part of the season."

Court Richards: "A lady walks quietly through the golden autumn colours in a Paris park."

Rachel Ind: "Mists, dew-covered cobwebs and the Sun stays low in the sky."

Chris Klein: "Walking with our dogs through a small patch of woodland - Gustav never tires of his sticks."

The pictures will be published later that week and you will be able to find them, along with other galleries, on the In Pictures section of the BBC News website.

You can upload your entries on this page or email them to yourpics@bbc.co.uk.

All photographs subject to copyright.