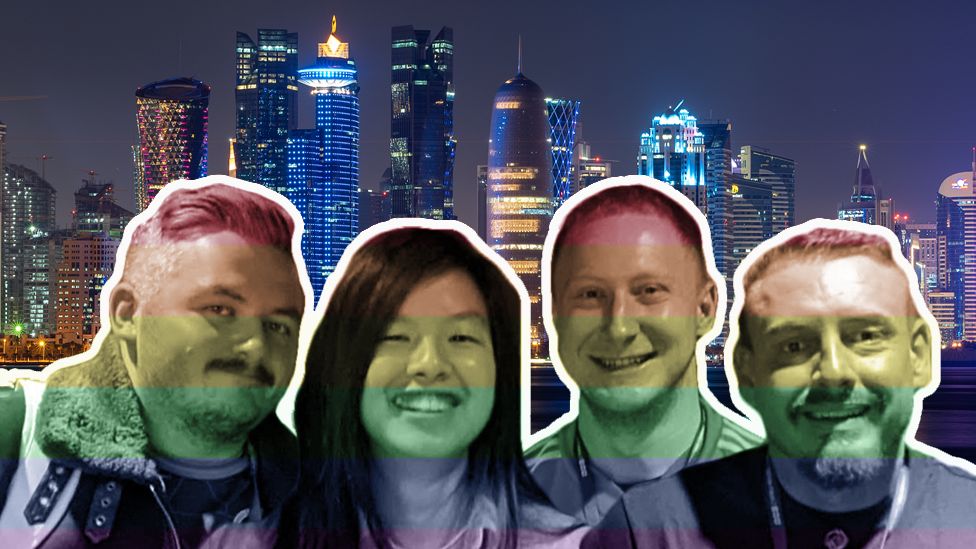 As Wales compete in their first World Cup since 1958, some LGBTQ+ fans won't even watch the games on TV.

Many members of the community have spoken out against Qatar being awarded the tournament.

The country has been criticised for multiple human rights concerns - including for its treatment of women, LGBTQ+ people and migrant workers.

BBC News spoke to a number of LGBTQ+ people, and an ally of the community, to understand how they feel ahead of the start of the tournament.

'Definitely not going to watch it'

Jia Wei Lee is 26 years old and identifies as gay and non-binary. Originally from Malaysia, they now live in Cardiff.

"I'm definitely not going to watch the World Cup - back in Malaysia, I usually do watch it with my family and friends because football is a big thing," said Jia.

"If Fifa could choose another country which is more LGBT friendly, then I definitely would watch it.

"If the ambassadors are there doing basically what the Qatari officials want them to do, then the event will not really make a difference, and it will also be detrimental for the LGBTQ+ community.

"Silence can be deafening, imagine if there are many countries boycotting the tournament.

"In Paris, they're not having fan areas anymore, in Germany, they're putting up "Boycott Qatar" banners.

"People who are watching, look at the teams and see what they are doing to gently protest against this, and if you are going to Qatar, try to look out for the local people, and use your voice in a privileged position to help the LGBT Qatari's."

James (far right) said if Wales were likely to be at more World Cups, he would be keen on boycotting this one in Qatar

James Brinning is a 29-year-old gay man from Cardiff.

"Obviously, the moment we qualified against Ukraine, I remember being there and thinking this is the best thing that I'm ever going to see as a Welsh fan.

"Then it kind of all dawned on me on the way out of the stadium. I thought, 'oh am I going to be able to go'.

"I was proper conflicted thinking about would I be able to go, would I want to go?

"It's proper mixed feelings for Welsh people, because we've had to wait so long since we were last at one.

"When I was deciding whether I wanted to go or not, I was consumed in thinking about my own personal safety.

"Then I realised that's probably the complete wrong argument, because it should be about the LGBT people who live their daily life, who are going to get a two or three-week break from their repression and being attacked by the authorities, and as soon as this World Cup finishes, the spotlight will turn back on them.

"But the one good thing that has come out of this is that footballers and teams have realised they have a profile and a voice, after the Euros and the racism, the England team were really good at speaking out about it, and hopefully that can instil a culture change.

"If [Wales] were likely to be at more World Cup's, then I'd be more keen on fully boycotting this one."

'Taken the excitement away'

Sam, who plays for LGBTQ+ football team Swansea Galaxy, loves football but has felt conflicted about watching the World Cup

Sam Ledgerwood is a 31-year-old gay man, and lives in Neath.

"Football has been a massive part of my life, even being an LGBTQ+ person, there are definitely issues there, but I can't see myself not watching it," said Sam.

"I'm definitely going to be watching it.

"There's definitely a bit of conflict there, but it's been a part of my life since I was five years old so it's really hard to juggle the two.

"As LGBTQ+ football fans, saying I'm not going to watch or be visible at the World Cup is worse than going there, and saying we are here, we are people, and be visible there.

"But as it has got nearer I do feel conflicted about it, I was adamant and didn't think twice, but as more things have come out with the Qatari ambassador, as well as the migrant workers and infrastructure issues and LGBT issues, it's taken the excitement away.

Simon Emmanuel is a 37-year-old straight man from Swansea and an ally to the LGBTQ+ community.

"Wales have been rubbish for a long time, and I don't think I'm going to get this opportunity again in my life time," Simon tells the BBC.

"What's been good about this whole fiasco though is the light that's been shone on the issues that I didn't know too much about before.

"It's a bigger issue than football, I don't think by boycotting the World Cup it's going to change the majority of the issues that are going on out there.

"Also, the World Cup has been in places where it probably shouldn't have been previously.

"I've been undecided for a long time.

"The World Cup in general is a good thing, it brings out a lot of positives and a lot of love in people, but why have it in a place where it's a disastrous place to be?

"It's just a tainted World Cup."