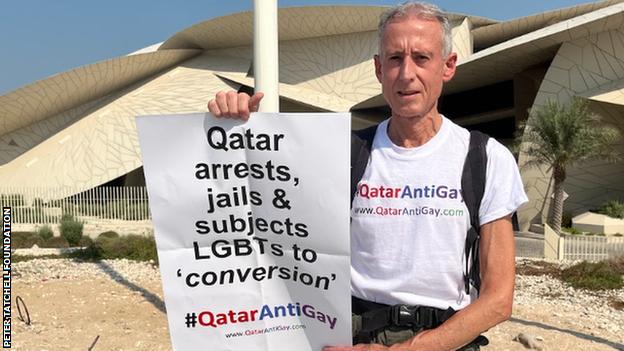 British LGBT rights campaigner Peter Tatchell has called on team captains to "devote 30 seconds" after each match at the 2022 World Cup to speak out on Qatar's human rights record.

It comes after Australia issued a statement criticising Qatar's treatment of migrant workers and LGBTQ+ people.

Tatchell, who was stopped from protesting in Doha on Tuesday, said: "Australian football stars are leading the way.

"They have set the gold standard."

The 70-year-old activist added: "I hope that every other national team will follow their lead and that all team captains will devote 30 seconds of every post-match news conference to affirm their commitment to the rights of LGBTs, women and migrant workers.

"That would be a fantastic, brilliant thing to do and I know it would be so appreciated by Qatari people, who are often privately and secretly hoping for a more democratic and human rights respecting government."

The decision to stage the World Cup in Qatar, a country where homosexuality can be punishable by death, has been heavily criticised since Fifa made the announcement in 2010.

Tatchell told BBC Radio 5 Live that the World Cup "is something that should go to nations who respect rights and do not discriminate".

The founder of Liverpool's LGBT+ supporters group Kop Outs, Paul Amann, said he was not aware of a "single out, gay football fan" that wants to go to the World Cup in Qatar.

"I'm told by hundreds of other LGBT+ fans of football, nobody is interested in going and all the different groups are reporting the same issues - that people don't want to go because it's not a place the LBGT+ people are welcome," he said.

Amann and his husband were invited by organisers of the 2022 World Cup to visit in 2019, a visit he describes as both "amazing and terrifying".

"To go into a country where on the statute book they have the death penalty for being gay, was not an easy thing to contemplate in the first instance," Amann said.

"We went with an ambition to engage, to try and encourage that country and the leadership, with it being the World Cup, to really move things forward to make sure it could be a World Cup for everybody.

"They made various promises along the lines of 'yes, everybody is welcome' and what they've done subsequently is prove that everybody will not be welcome, because they've continued to oppress LGBT+ people in their own country."

On Wednesday, the UK's Foreign Secretary James Cleverly told LBC that LGBT football fans who attend the tournament in Qatar should show "a little bit of flex and compromise" in order to be "respectful of the host nation".

His comments were criticised by the Labour Party as "shockingly tone-deaf" and Conservative party chair Nadhim Zahawi contradicted Cleverly, saying LGBTQ+ football fans travelling to next month's World Cup in Qatar should not have to compromise external-link on their sexuality.

In response to Cleverly's comments, Qatar's ambassador to the UK, His Excellency Fahad bin Mohammed Al-Attiyah said: "We are doing everything we can to make sure this is a safe and secure tournament for all fans.

"We're not asking anybody to change who they are, all we're saying is that in life you respect others to respect your own values and norms in cultures.

"We don't discriminate, nobody is going to be asked at any check-points to prove their gender or sexuality.

"I would say we're a hospitable country with open hearts and open arms to welcome friends, colleagues and the people of England and Wales. They should come and support their team, have a great time, feel safe and get to know the host country's culture." 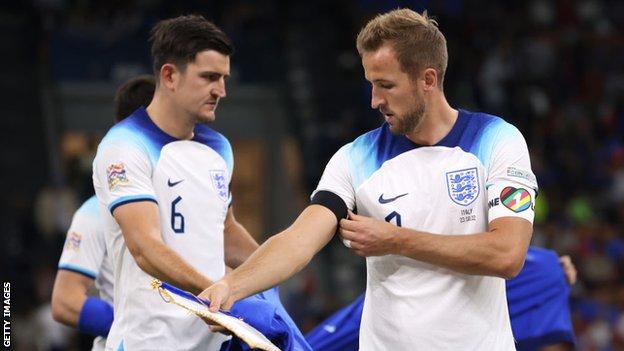 Players from nine European countries, including England, will wear 'One Love' armbands to protest Qatar's laws around same-sex relationships

Al-Attiyah called Qatar an "open international society" and said that nobody had been persecuted based on their gender identity.

"But there are certain interpretations as to what would be a display of affection, in a particular country that might be different in another. So I think one just has to be mindful of the norms and cultures of Qatari society in that respect."

'No country is perfect'

A video external-link released by Australia, which features 16 players, called for "effective remedy" for migrant workers and the decriminalisation of same-sex relationships.

In response, a spokesperson for Qatar's Supreme Committee for Delivery Legacy (SC) said: ''We commend footballers using their platforms to raise awareness for important matters.

"We have committed every effort to ensuring that this World Cup has had a transformative impact on improving lives, especially for those involved in constructing the competition and non-competition venues we're responsible for."

Human rights groups have complained about the treatment of foreign labourers in Qatar, and the number who have died there.

In February 2021, the Guardian said 6,500 migrant workers from India, Pakistan, Nepal, Bangladesh and Sri Lanka had died in Qatar since it won its World Cup bid.

However, the Qatar government said the total was misleading, because not all the deaths recorded were of people working on World Cup-related projects.

The SC spokesperson added: "Protecting the health, safety, security, and dignity of every worker contributing to this World Cup is our priority.

"No country is perfect, and every country - hosts of major events or not - has its challenges."