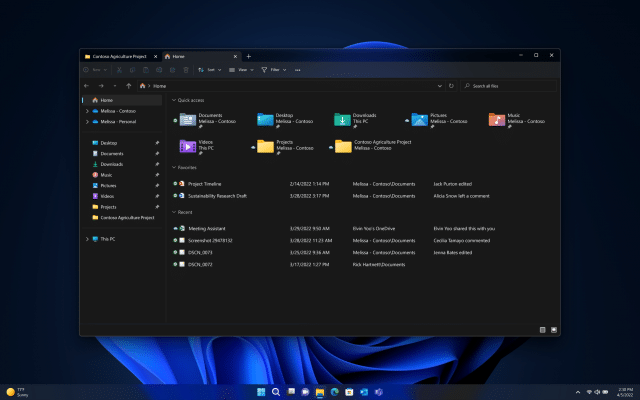 Yesterday, to great excitement, Microsoft started the rollout of the eagerly anticipated Windows 11 2022 Update. While there are a lot of worthy changes and additions with this update, there are several features -- perhaps most notably tabs in File Explorer -- that were conspicuous by their absence.

But the missing features have been neither forgotten nor dropped; Microsoft has simply decided to include them in a future update. Before you start gnashing your teeth, there's some good news. The release of  Windows 11 2022 Update may not have heralded the arrival of tabbed Explorer, but it will be landing for everyone next month.

Microsoft has not made it explicitly clear why it is releasing a secondary update for Windows 11 so soon after the first major update, but we can make assumptions. Anyone who has tested the Dev and Beta builds of Windows 11 has already been given access to tabs in File Explorer, and it has been a little problematic. Microsoft clearly wanted a little more time to get things just right. And it believes things will be ready for next month.

But it is not just Explorer tabs that are coming in October -- there is more to look forward to as well.

Microsoft describes the upcoming additions as "an additional set of experiences". Although the company is not referring to these future updates as such as the moment, they sound very much like the "Moment" updates we heard about recently.

The release date for these additions has not been given beyond saying that it will be next month. It is not clear whether the release will coincide with Patch Tuesday, or if it will be completely separate. Either way, it is only a matter of weeks until Windows 11 users have even more toys to play with.

Source: https://betanews.com/2022/09/21/microsoft-may-have-released-windows-11-2022-update-but-the-best-updates-are-coming-in-october/
We use cookies to ensure that we give you the best experience on our website. If you continue to use this site we will assume that you are happy with it. Ok