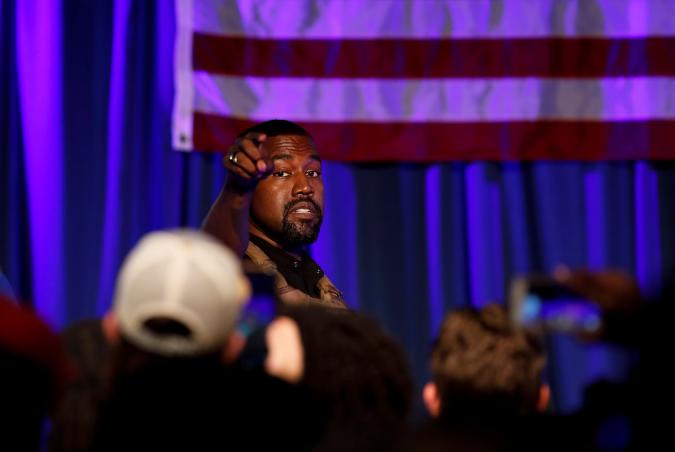 Last week, Kanye West (aka Ye) was locked out of his Twitter and Instagram accounts following a weekend of antisemitic posts. Now, the saga has taken a sharp turn with news that the hip-hop mogul is acquiring the controversial "free speech" social media app Parler. The deal appears to be happening quickly, with the company behind Parler (Parlement technologies) saying that the parties expect to close the transaction in the fourth quarter of 2022. The price was not revealed.

"The proposed acquisition will assure Parler a future role in creating an uncancelable ecosystem where all voices are welcome," said Parlement Technologies CEO George Farmer. "In a world where conservative opinions are considered to be controversial we have to make sure we have the right to freely express ourselves," Kanye added.

Shortly after his return to Twitter, West posted an antisemitic message, which was eventually pulled by the company. "The account in question has been locked due to a violation of Twitter’s policies," a spokesperson said at the time. The rapper also shared a screenshot on Instagram with another antisemitic message, and was similarly restricted by that site.

Talked to ye today expressed my concerns about his recent tweet, which I think he took to heart

According to the Twitter post above, potential future Twitter owner Elon Musk expressed concerns to West about his tweet, saying "I think he took [them] to heart." Apparently, he did so by purchasing a rival service.

Meanwhile, Parler was only recently reinstated to the Google Play after being banned in January 2021 following the US Capitol insurrection. A Google spokesperson said at the time that the removal was due to the app's lack of "moderation policies and enforcement that remove egregious content like posts that incite violence." Apple removed the app for similar reasons, but restored it earlier in May.

As their comments suggest, Parler and West are lauding the acquisition as a boon for free speech. However, if Parler allows racist, sexist or antisemitic posts like the one that got Kanye removed from Twitter and Instagram, it could pulled again from the App Store and the Play Store.

Parler launched in 2018 but spiked in popularity after Donald Trump was banned from Twitter and Ted Cruz and others tweeted they were joining the app. Despite declaring itself to be the "free speech social network," however, some Twitter users said they were banned after joining the app to troll conservatives. Parler also competes against Trump's own Truth social media app.

All products recommended by Engadget are selected by our editorial team, independent of our parent company. Some of our stories include affiliate links. If you buy something through one of these links, we may earn an affiliate commission. All prices are correct at the time of publishing.