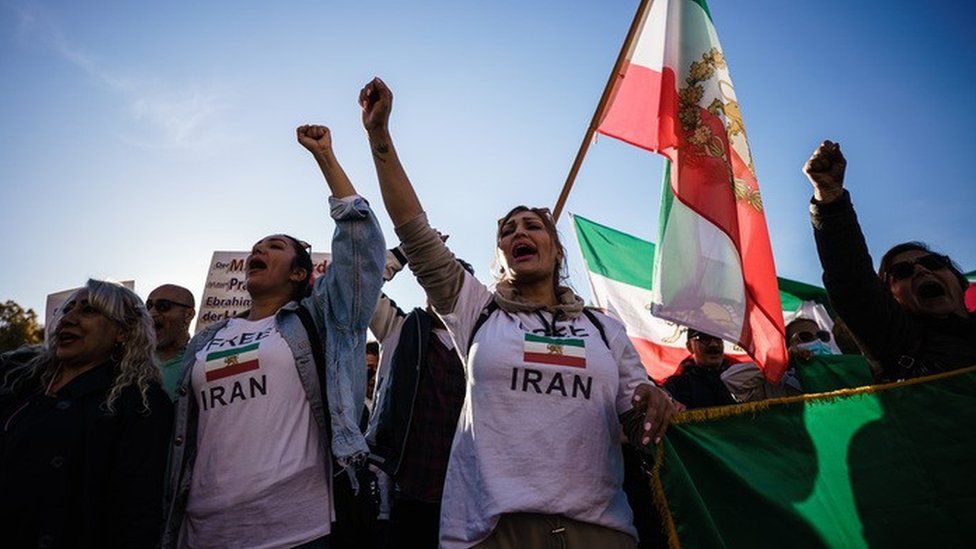 The anti-government protests sweeping Iran are now in their eighth week, with no sign of ending, despite a bloody crackdown. The rest of the world has watched with alarm, with some countries taking steps in support of the protests.

What do Iranians want?

The protesters first want to be heard and get news coverage by the world's media. The Iranian government has taken steps to minimise this as much as possible. For instance, foreign correspondents there (the BBC and others are banned) are not permitted to report the protests, film them or even take pictures.

As a result, citizen journalism and posting videos of protests on social media are key to getting the news out. But the government tries to stop this also. According to internet monitoring group NetBlocks, during the last seven weeks, the internet in Iran has often been shut down or massively interrupted.

At the same time, 32 journalists have been arrested, according to the International Federation of Journalists, and the two remaining social media apps, Instagram and WhatsApp, have been blocked.

Opposition figures and civil society activists continuously call for more pressure on the regime to stop the violence and to hold it accountable. According to rights groups, more than 300 people, including at least 41 children, have been killed since the protests started.

More than 300 people have been killed since the protests began, rights groups say

Prince Reza Pahlavi, the son of the last Shah, or king, of Iran and a central figure for opposition outside the country, wrote to UN Secretary General António Guterres and the UN's children's charity Unicef. He asked for multinational investigations into the killing of children in Iran. Along with other well-known opposition figures, Prince Reza has repeatedly called on Western leaders to openly condemn the violence by the Iranian government.

Many activists and opponents of the Iranian regime have also called for Iranian diplomats to be expelled from other countries and for the recall of foreign diplomats from Tehran.

Figures such as Hamed Esmaeilion, Prince Reza or Masih Alinejad, who has campaigned against the compulsory hijab (headscarf) rule in Iran, have for years tried to push the Iranian government into even deeper international isolation. To this end, Masih Alinejad has also been trying to get the Iranian football team banned from the 2022 Fifa World Cup.

It is hard to say whether banning the nationally beloved "team Melli" (or national team, in Persian) from the tournament in Qatar is popular among protesters inside the country. The retired Iranian football stars, Ali Karimi and Ali Daei, are firm supporters of the protests, and some members of the current national team have openly embraced the protests.

However, none have supported the call to ban the side from the World Cup. Some protesters argue it will actually provide an international stage for players and protesters to spread their message.

What are countries doing?

In September, the Biden administration issued a sanction guideline to support the Iranian protesters, exempting tech companies who wanted to provide services to Iranians. When the US Secretary of State Antony Blinken tweeted this news, Elon Musk quickly replied: "Activating Starlink..." - his satellite internet firm. Mr Musk's company Space X also said it could provide services to Iranians against the will of the Islamic government.

But Starlink's internet access has significant limitations, such as the need for specific hardware and relatively high cost. Still, if such access becomes a reality in Iran, protesters will be immunised against the worst cases of internet shutdown and it will be impossible for the regime to carry out oppression without the knowledge of the outside world.

Starlink aims to help Iranians get round internet restrictions

As for the support from international organisations, the non-governmental ones, especially those advocating for human rights, are especially active. But the international governmental bodies with legitimate authority to inquire about the Iranian government - such as the UN Human Rights Council - have not gone beyond statements of concern.

States control these organisations and always act according to their foreign policy priorities. Activists say that human rights are not necessarily of the greatest importance to many countries.

Beyond the West, states mostly have either economy or security as their top priority when it comes to an oil-rich Middle Eastern theocracy like Iran. China and Russia - the only two non-Western major powers - have friendly relations with Tehran. In addition, they are both annoyed by international organisations' criticism of their own human rights records and constantly denounce those efforts.

Also, in Western countries, other issues, notably Iran's nuclear programme and its recent involvement in the Ukraine war, are a great source of anxiety. Although the negotiations with Iran to revive the 2015 nuclear deal stalled before the current wave of protests, both sides still insist the talks have not collapsed yet and that the window for a diplomatic solution is open. Supporting the Iranian protesters can easily jeopardise such a prospect.

But the solid public reaction in Western countries endorsing the Iranian protests have made it challenging for their governments. Even former US President Barack Obama called his decision not to support Iranian protesters in 2009 a mistake that the Biden administration says it will not repeat.

So far the US, UK, EU and Canada have sanctioned Iranian officials and organisations accused of being part of the crackdown. Still, all the measures by the West have been carefully calculated not to antagonise Tehran and keep the diplomatic window open. Hence, the chances that the demand of Iranian protesters to cut ties with the Iranian government will be met are slim.