It was reported Game 1 of the 2022 World Series on Saturday that Astros starting catcher Martín Maldonado had received a half-dozen bats from retiring legend Albert Pujols to use in the series, believing Pujols' bats would be of a higher quality given his stature.

Martin Maldonado reached out to Albert Pujols before the start of the World Series and asked Pujols to send him some bats -- and today, a half-dozen arrived from the future HOFer. Maldonado believes the Pujols always got some of the best quality of bats because of his stature.

It was an interesting little quirk, until a subsequent report during Game 2 on Saturday. As explained by Fox Sports' Tom Verducci, Pujols' bats are actually illegal under current MLB specifications, but he's allowed to use them because he was grandfathered in during a rule change in 2010.

That loophole is apparently open for any player who debuted before 2010. Maldonado entered MLB in 2011.

Maldonado went 1-for-3 with a walk in a 6-5 loss for the Astros, so the mishap at least didn't alter the course of the seven-game series.

"Martin Maldonado is using a different bat today, here in Game 2. He found out from MLB today that the bat he used last night was not a legal bat. It was a model that he obtained from Albert Pujols, and he used it because he thought it was very similar in size and weight to his own model. The barrel, he said, was slightly bigger. He also thought it was a way to honor the baseball legend, of course retiring with the close of this season, but here's the catch to it, guys.

"In 2010, Major League Baseball changed the bat specifications and that bat that Pujols modeled was no longer legal, except if you were playing prior to 2010 it was grandfathered in. So Albert Pujols could use that bat but Maldonado, who began his major league career in 2011, was not legally able to use that bat."

Awkward, given the Astros' recent history in the World Series.

Of course, it should go without saying there is a difference between a group of players making a conscious decision to use a camera feed to illegally relay pitch signals in real time all the way to a now-tainted World Series and one player using the wrong bat for one game his team lost.

The Astros' cheating scandal leaves little room for nuance for most fans, though, so the Maldonado revelation awakened a lot of ire still directed at the team. Plus some non-serious ire.

On the other hand, some also noted that MLB's 2010 rule change was basically to outlaw low-density maple bats because they kept shattering (one player was infamously impaled by a shard during a game that year), though the league also decreased the maximum circumference from 2.75 inches to 2.61 inches, as Verducci reported. 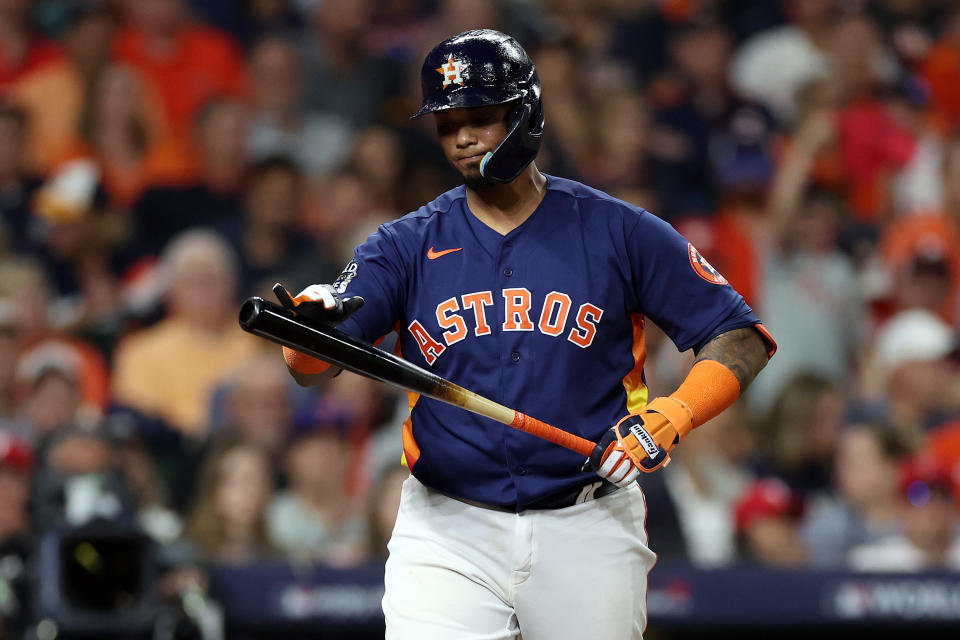 Martín Maldonado made a mistake with his bat in the World Series. Does that make him a cheater? (Photo by Sean M. Haffey/Getty Images)